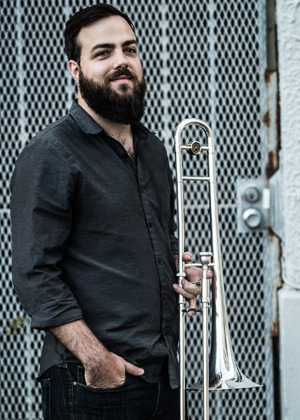 "It was at Winter NAMM 2017 that I first realized Cannonball made trombones. I had seen and heard Cannonball horns before and the visual beauty was only surpassed by their tonal purity, so needless to say I was very excited to hear what their trombones had to offer.

When I began talking to the people at the booth I realized that this is much more than just a horn company. This is a family owned business of passionate and dedicated master craftsmen that take what they do very seriously. When I explained the styles of music I played I was handed the silver plated jazz trombone. I was blown away! The notes practically fell right out of the bell! the resistance was great, the action was fluid, and the tone was perfectly jazzy.

I have been a Jazz trombonist since I started 16 years ago. Having been a player of older models I’ve tonal quality that I needed. The first time I picked up that cannonball, everything changed. I knew that I was holding an instrument that was tonally excellent, reliable and that would finally allow me to express myself without limitation.

I would love more than anything to represent cannonball as a brand, and bring attention to the amazing line of trombones that you as a company have masterfully crafted. At every show that I’m asked “what’s the best trombone you’ve ever played?” my answer is always: Cannonball." ~ James Dabone

“One of the best trombone players I've ever heard” - Victory Wooten

James Johnes AKA James Dabone is a Sarasota native and founding member of Ari and the Alibis. Greg Nielson was James’ middle school band instructor. He saw the potential in James and dedicated his time via free private lessons to help James develop the technique needed to become a professional. James continued studying the trombone throughout high school and began gigging at age 16.

James has performed and recorded with many artists, most notably Ben Hammond, Alexander Star, Gary Casten, Marc Solomon and his group Ari and the Alibis. Through his work with Ari and the Alibis he has played many festivals, concerts and clubs all over the US and will be performing at a concert in Canada this July. The bands performance at this years Winter NAMM lead to an endorsement deal with Sennheiser that is one of the biggest they have signed with a non national act. This contract will be opening many doors for the group in the months and years to come. The official press release will come out this March.

James’ passion and vision have lead him to find a new place for the trombone in modern music. Not only is he the prominent lead player but his use of effects allows him to create sonic landscapes that capture the emotions of the songs. This door he has opened has brought many new people to the appreciation of the trombone and expanded their minds of what it is capable of.